Canasta is a card game for four players. Two players sitting across from each other form a team, playing against the other two players. The goal is to be the first team to reach 5,000 points by putting cards into melds on the table. A round lasts until one player is able to put all his cards on the table which is called going out. This requires at least one Canasta, a meld consisting of at least seven cards.

On their turn, a player first draws a card. If possible, the player may place cards on the table to start a new meld or add to an existing meld. The turn ends when the player discards one of the cards in hand on the discard pile. 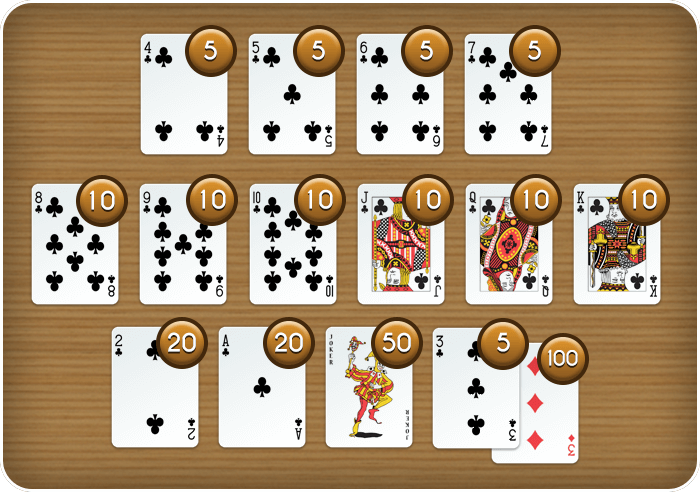 
Taking Cards from the Discard Pile

Instead of drawing from the stock a player may draw his card from the top of the discard pile and take the whole discard pile, if they can use that card in one of their melds or start a new meld with at least two other cards from their hand. However, the discard pile cannot be taken in this way if it is blocked.

The discard pile is blocked (also called frozen), if there is a wild card (Joker or 2) in it. To make this visible, the first wild card in the stack is turned sideways. The discard pile is also blocked for a team that has not yet melded any cards. A blocked discard pile can only be unfrozen by combining its top card with two natural cards from your hand to either start a new meld or add to an existing one. 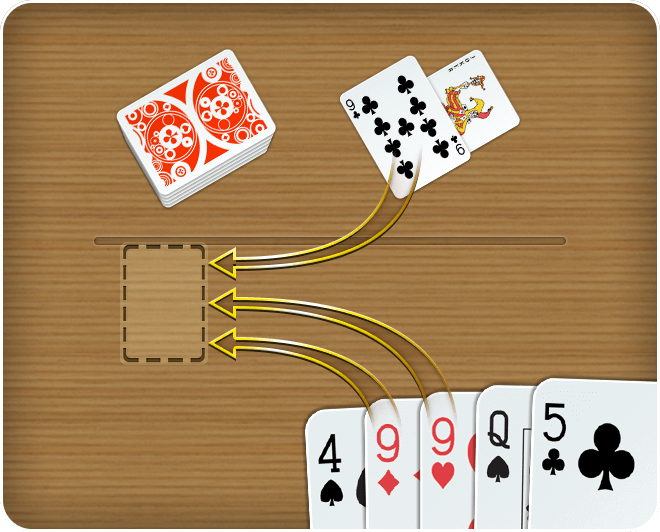 How to Use the Discard Pile

3s are special cards in Canasta and cannot normally be melded at all. If a player draws a red 3, it is put on the table immediately and the player must draw a replacement instead. If a red 3 is in the discard pile at the start of the game, the discard pile is blocked.

Black 3s can only be melded immediately before going out. Black 3s on the top of the discard pile can never be taken. 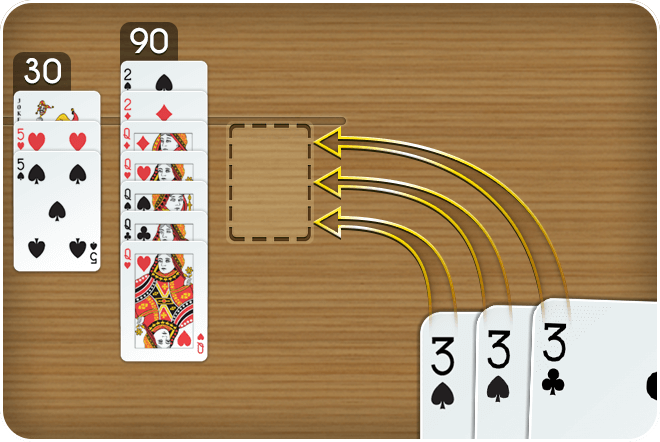 
Canastas and Going Out

To win a round, a player must go out by getting rid of all cards in their hand. This is only allowed, if their team has at least one Canasta, a meld consisting of seven or more cards. The last card of a player may be played in a meld or discarded. The team that goes out receives an additional 100 points. If the player who goes out has not melded any cards yet and manages to play a complete Canasta, they go out concealed, which earns the respective team 200 additional points instead.

After a player goes out, each team receives points for its cards. Cards in melds score their respective points while each card left in hand scores negative points. Red 3s are worth 100 points each, if the team has melded any cards, or 800 points, if the team has all four red 3s. If the team has not melded any cards, each red 3 deducts 100 points from the total score. Additionally, the teams receive points for their Canstas. Every Canasta with natural cards only is worth 500 points and mixed Canastas that include wild cards are worth 300 points. 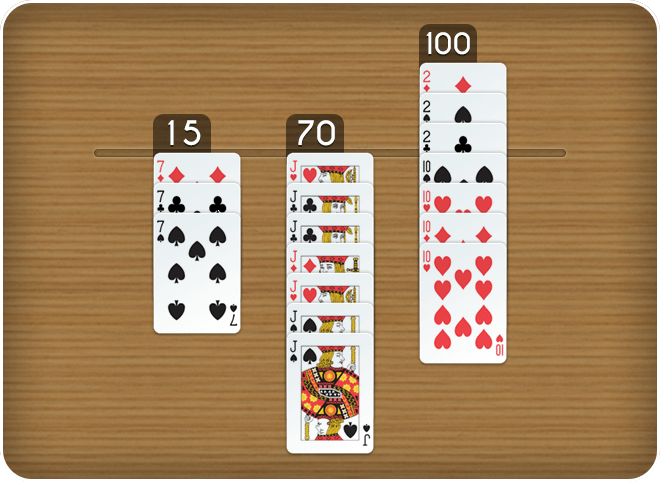 If the player wins a game, they receive 3 points for the online leaderboard. Leaving a game results in the player’s team losing and receiving 0 points.

Where can I find the game rules in the app?

Select the menu on the start screen (button in the upper left corner with three lines) and press “Game Rules”.

Where can I find the settings?

Select the gear on the start screen or open the menu (button in the upper left corner with three lines) and press Settings.

How can I select more than one card?

There are two ways to select multiple cards to place:
1. Tap all the desired cards and then tap the table.
2. Place your finger on the first card and hold down the screen. Drag your finger over the corresponding cards (including joker/wild card) and then directly to the table. If you let go now, all cards should be placed.

Make sure you touch the top of the cards when making your selection. In the lower area you can move your hand for better visibility.

How do I find friends/players and add them to my friends list?

There are two ways to find players and add them to your friends list, in the player menu and in the game history. Both can be accessed via the main menu. To do so, press the button with the three lines in the upper left corner of the start screen.

1. If you are looking for a specific player, open the menu item “Players” and select the search function, e.g. search tab or magnifying glass. Enter the name of the player you want to add to your list. Tap the name of the desired player in the results list to open their profile. Now select “Add friend.”

2. If you are looking for a player you have already been playing against, open the menu item “Match history.” Tap the name of the desired player in the game history to open their profile. Now select “Add friend.”