Goal of the Game

Okey is a game of the Rummy family, played with a set of 106 wooden tiles. The faces of the tiles are numbered from 1 to 13. There are eight tiles of each number: two red, two yellow, two blue and two black. In addition there are two special tiles with a shamrock, the so-called “false jokers”. 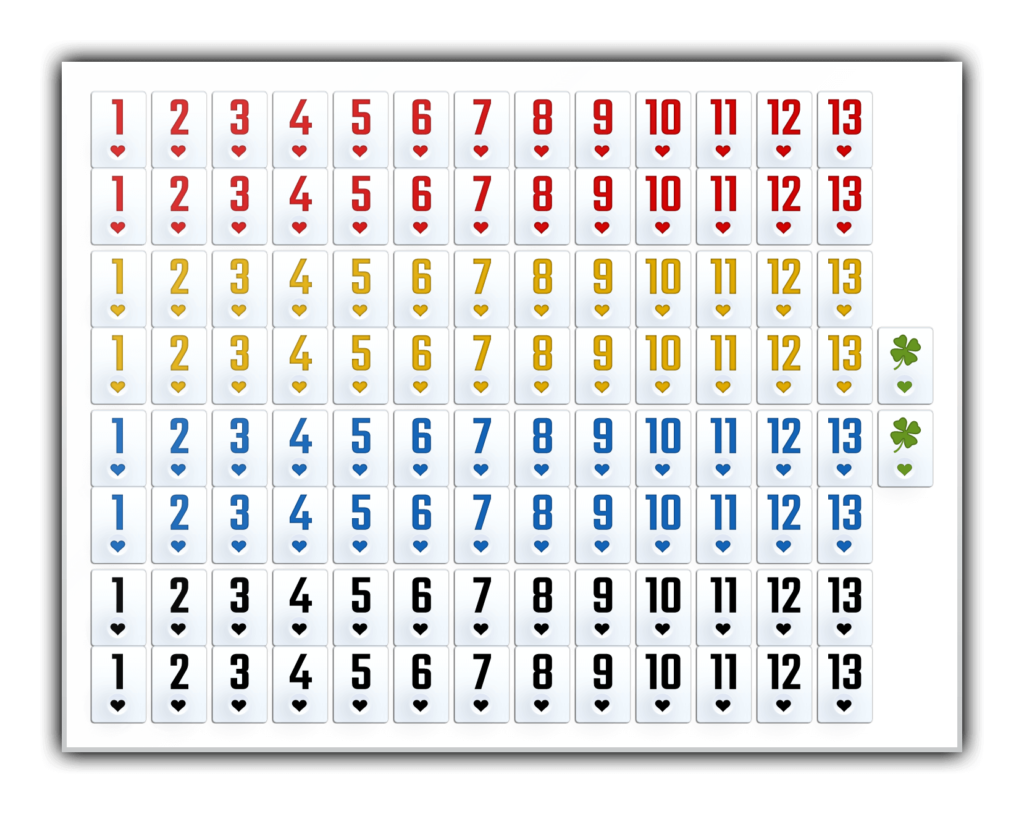 
During the game each player receives a hand of 14 tiles. The objective of the game is to form a hand that consists entirely of sets of equal numbered tiles and runs of consecutive tiles of the same color. This can be achieved by drawing and discarding tiles. The first player to complete their hand wins the game.

The whole game is played counterclockwise. Okey is played by up to four people of which one is determined to be the dealer. The player to the dealer’s right begins the play by discarding one tile face up. After this, each player in turn may either take the tile just discarded by the previous player or draw the next tile from the supply in the centre of the table. Finally, they must discard one unwanted tile. This continues in counterclockwise rotation until a player forms a winning hand and exposes it, ending the play.

Discarded tiles are placed to the right of the player who discarded them, in a stack, so that only the most recent discard in the stack is visible. Exception: When a player’s collection is complete the last tile is discarded on the pile in the middle of the table, ending the game. 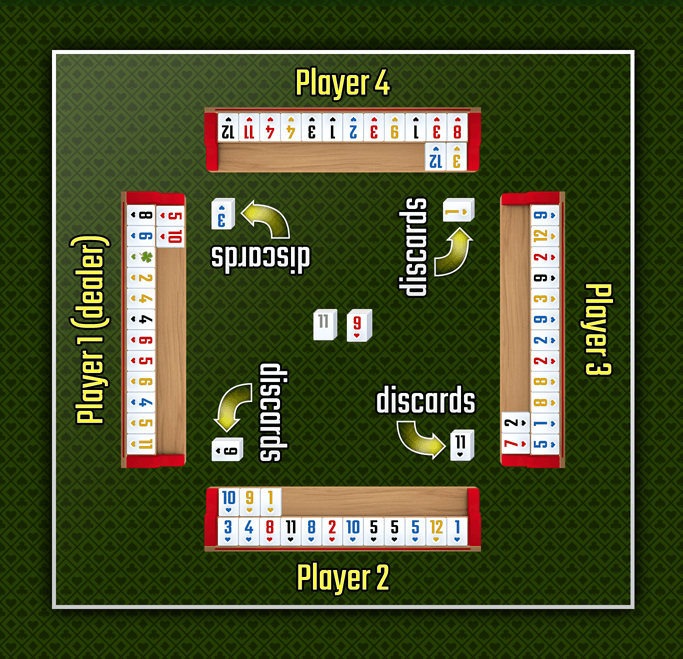 The objective of the game is to collect sets and runs.


A winning hand consists of 14 tiles formed entirely into sets and runs, for instance, two sets of 3 and two runs of 4, or a run of 6 plus a run of 4 plus a set of 4. No tile can be used as part of more than one combination (set or run) at the same time.


You can arrange your tiles by pressing the “Sort Sets” button to order them in a row or “Sort Runs” button to arrange them in sets. You can also enable/disable auto-arrange in the settings.

Another type of winning hand can be composed of seven pairs. Each pair must consist of two identical tiles, such as two black 9s. Two tiles of the same number and different colors do not make a pair – the colors must be the same as well.

At the beginning of each new round the (real) jokers are determined. The two tiles that are the same color as the face up tile and one greater in number are the jokers. These tiles can be used to represent any tile the holder desires in order to complete a set or run. For example, if the red 4 is face up, the red 5s are jokers. Blue 6 – red 5 – red 5 – blue 9 would count as a run, using jokers for the blue 7 and 8. Alternatively, yellow 10 – black 10 – red 5 would be a set, using the red 5 to represent the blue or red 10. When collecting a hand of seven pairs, a joker can be used with any tile to form a pair. 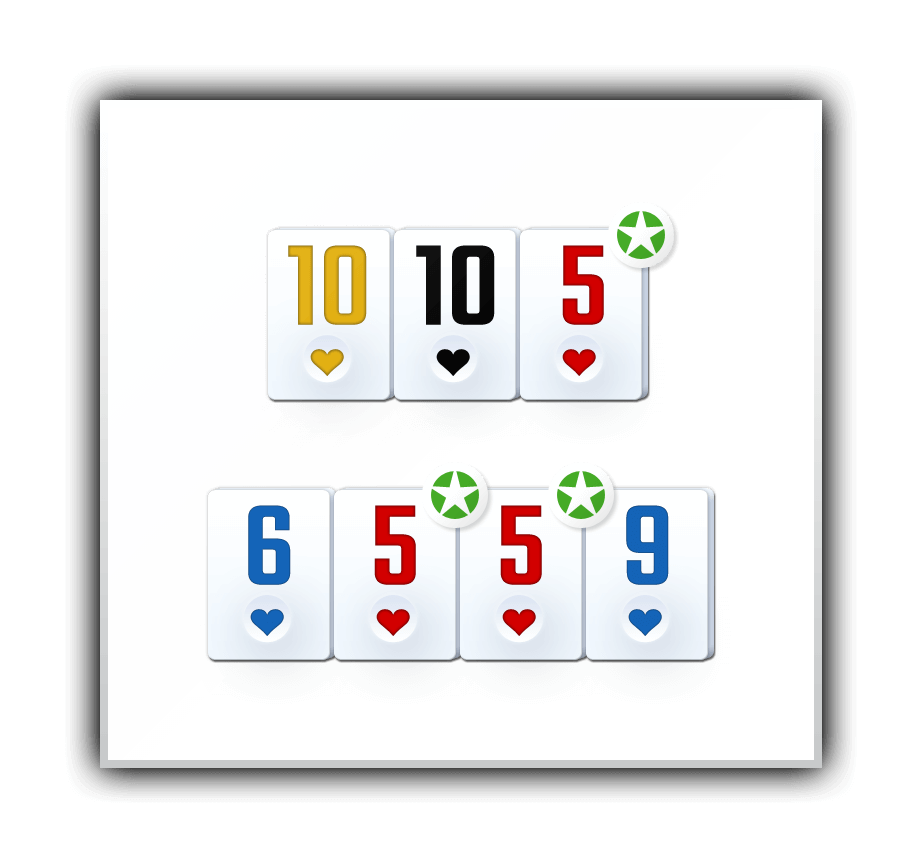 
The two false jokers – the tiles with the shamrock on it – are used only to represent the joker tiles. Therefore, when red 5s are jokers, the false jokers are played as red 5s. In this case, for instance, a red 4 – false joker – red 6 count as a run and a black 5 – blue 5 – yellow 5 – false joker count as a set. 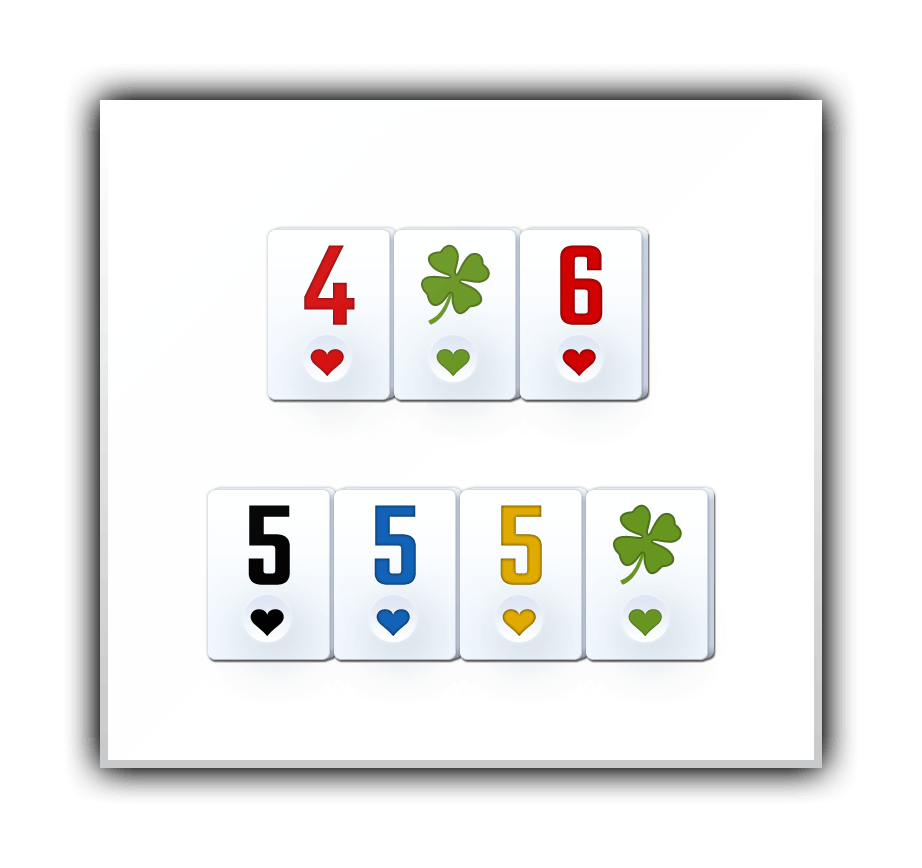 
If you have a winning hand of sets and runs using at least one joker, you do not have to expose it immediately. If you wish, you can continue playing in the hope of forming a winning hand plus a joker as the last discard tile.

If you are able to end the game by discarding a joker and exposing your remaining 14 tiles as a winning hand, your win is worth twice as much as an ordinary win. Note that by continuing to play instead of exposing your ordinary win, you run the risk that another player may complete a winning hand and expose it before you can achieve your double win, in which case you gain nothing for your concealed winning hand.

Each player begins the game with 20 points and loses points each time another player wins a game, as follows:

When a player wins an ordinary game, each of the other players loses 2 points.

When a player wins by discarding a joker, each of the other players loses 4 points.

When a player wins with seven pairs, each of the other players loses 4 points.

If the game ends without any player exposing a winning hand (because there are no tiles left to draw, and the player whose turn it is cannot win by taking the previous discard), then there is no score.

Play continues until any player’s score reaches zero or less. The player with the highest score at that time is the winner and all other players are the losers.

Can I change the colors of the tiles?

Yes. Open the settings menu (gear in the top right corner) and turn on “Tile Options”. In order to change the color or design of a tile, tap the tile several times.

I finished collecting all pieces. How do I end the game?

Once you have arranged all of your tiles in sets and runs respectively pairs, discard your last tile on the pile in the middle of the table and end the game. Next, the winning screen is shown to you.

How do I find friends/players and add them to my friends list?

There are two ways to find players and add them to your friends list, in the player menu and in the game history. Both can be accessed via the main menu. To do so, press the button with the dots in the upper left corner of the start screen.

1. If you are looking for a specific player, open the menu item “Friends” and select the search function, e.g. search tab or magnifying glass. Enter the name of the player you want to add to your list. Tap the name of the desired player in the results list to open their profile. Now select “Add friend.”

2. If you are looking for a player you have already been playing against, open the menu item “Games.” Tap the name of the desired player in the game history to open their profile. Now select “Add friend.”